A summary of the trial story in English. 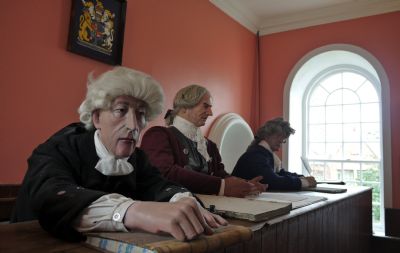 The late 18th century covered a period known as the Scottish Enlightenment. In response to the horrors and division of the Jacobite rebellion just a few decades earlier, wealthy landowners such as George Ross (the senior Justice) tried to bring peace, justice and improvement to their estates. Ross is a wealthy lawyer who has made his fortune in London prior to buying the run-down Cromarty Estate as a retirement project. He is flanked by William Forsyth, a successful and well-travelled Cromarty merchant and Hugh Rose, another wealthy local landowner.

It is George Ross who has funded the new Courthouse. Before this, trials were heard in a local alehouse.

A group of young gardeners and a group of weavers – rival local gangs – have had a drunken punch-up in an alehouse and William Naughty, one of the weavers, has been seriously injured.  The group of the lads responsible for the riot would have been tried en masse, but to make the scene easier to follow we have chosen to make Cuthbert MacKenzie, one of the gardeners, the sole defendant.

The witnesses to the crime are two alehouse keepers: William Elder, who doubles as the jailer, and Jannet Ross (no relation to George Ross). Two alehouse keepers in the same town are likely to have been rivals, so in this telling of the tale there is no love lost between them.

Jannet gives a vivid account of the weavers sitting in her downstairs room and the gardeners starting to dance to the tune of Cuthbert’s fiddle in the room above. The thump of their feet shakes dirt from the floorboards into the weavers’ bowl of punch below and the weavers, already drunk, retaliate by singing a rude song back at the gardeners. Soon they are knocking seven bells out of each other. Jannet panics and sends for William Elder as the Sheriff’s man. By the time he gets there, they are sprawled about the highway outside the alehouse.

Cuthbert MacKenzie has come into Cromarty from neighbouring Resolis in search of work and George Ross himself has taken him on as a gardener. He is one of an increasing number of Gaelic-speaking people in the locality, but Cromarty in this period does not consider itself a Gaelic-speaking town. Gaelic speakers were often looked down on by non-Gaelic areas in the decades following the Battle of Culloden.

It is a simple case of ‘them and us’.

Cuthbert tries to explain that his precious fiddle got broken in the riot and that he had only fought at all because the Cromarty weavers were taunting him for being a Gaelic speaker. This excuse fails to impress the Justices: keeping order between all the different factions in the town is George Ross’s hardest task as Laird.

Ross finds out that MacKenzie has agreed to join the army and although he initially presses for a fine too, he then relents.

The ‘Seers’ at the end foretell MacKenzie’s army career: initially he is stationed at Fort George and does well, rising to the rank of pay sergeant. The regiment is then ordered to America and marched south. MacKenzie deserts at Stirling. The only place he has any family or friends is Cromarty but William Elder arrests him on his return. MacKenzie is soon handed over to the Army who will have made an example of him and had him flogged. This was a grim fate not all survived.

This trial is based on original trial records, Kirk Session documents and Army records.