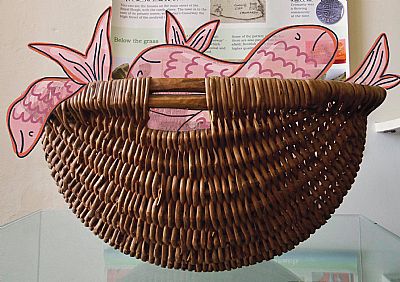 As part of Scotland's year of Coasts and Waters, three local artists, Jacqueline Briggs, Alice Taylor and Izzy Thomson, have been supported by Scottish Natural Heritage's 'Plunge In! Coasts and Waters Community Fund' to work in partnership with Cromarty Courthouse Museum, alongside the communities of Cromarty and Resolis. This project will explore our connection with the sea, in the hope to celebrate people’s appreciation of the area we live in and our desire to look after our coasts and seas. Research gathered from marine experts and memories from local residents will be brought together to create a large community artwork in the form of a patchwork sail which will be displayed in the Courthouse garden.

If you would like to get in contact with the artists for more information, please email: theseainside2020@gmail.com

To read more about the fund, please see: https://www.nature.scot/plunge-projects-revealed-world-oceans-day

The first lot of art parcels (these ones aimed at children) will be ready for collection/ delivery on the 4th of August. They will include inspiration from the sea, collage materials and easy instructions. You can collect one from the Courthouse garden.

If you are looking for any help creating your collage or would just like some inspiration, please click on the above link to see our handy instructional guide video. You may also recognise the voice!

We look forward to seeing what you create! 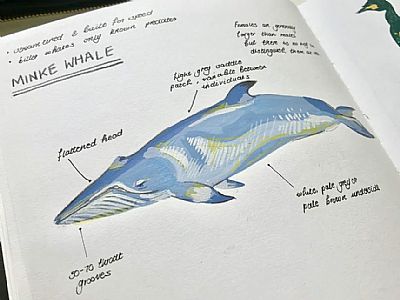 Saddened and inspired by the juvenile minke whale that was washed onto Cromarty sands, we found out more about whales and Cromarty’s connection to them.

“About 25 years ago Helen Couper (Bobby Hogg’s wife) told me that Dundee whaling ships used to call at Cromarty to stock up with fresh water because the water from the springs along the shore to the west kept particularly well.”

It’s amazing to think of the journey these sailors undertook, leaving the Cromarty Firth and travelling all the way to the infamous whaling stations of Greenland.

Thankfully now for the most part, instead of whales being looked at as a product for meat, oil, and bone scientists are establishing their ability to store carbon - like amazing underwater forests. This could not only help with the fight against climate change, but could mean the increased protection of whales like the minke and the beautiful humpback whale that has been sighted visiting the Cromarty Firth. 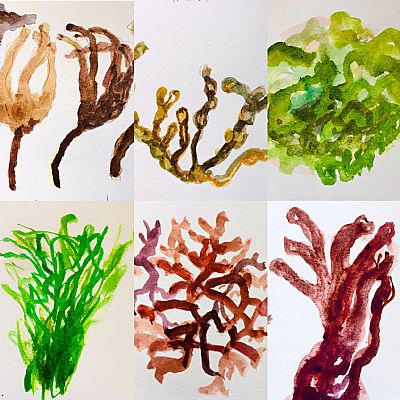 Seaweed is a type of marine algae and is one of the oldest groups of plants on the planet. One group of scientists found some Kelp off the coast of Scotland that is aged 16,000 years old! Seaweeds, especially kelp, are often called underwater forests and in the same way as trees, they are very important for our environment because they absorb carbon dioxide from the atmosphere and give out oxygen, as well as helping to prevent coastal erosion. They provide homes for between 30 and 70 different species – and many hundreds of individual animals, including:

These habitats in turn provide important nursery areas for young fish, which in turn provide food for higher predators such as seabirds, otters, seals and possibly dolphins. Isn’t it amazing to think all of these creatures who also live in Cromarty!

There are many different types of seaweeds. Here are a few that you can find locally…

If you are interested in seaweed identification, you can use the free app ‘Seek’. 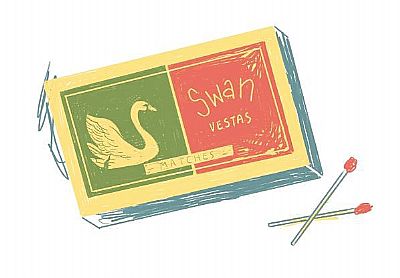 In the past, stories and language were swapped and taken from the ships and boat traffic that came in and out of Cromarty. This influenced the Cromarty fisher-folk dialect, which was only spoken in fisher-town and nowhere else in Cromarty. It was a mix of words and phrases, from Doric to Gaelic, with a lot of the words being Anglified Gaelic.

Here are some of the seafaring superstitions that overlap from fishing on the West coast, to the Cromarty Firth and the Royal Navy:

‘earnestly invoking the wind in a shrill tremulous whistling - calling on it in fact in it’s own language . . . on thoughtlessly beginning to whistle one evening about twelve years ago, when our skiff was staggering under a closely-reefed foresail, I was instantly silenced by one of the fishermen with a “Whisht, whisht, boy, we have more than wind enough already;”

He also wrote of an old tradition called ‘soothing the waves’...

‘When beating up in stormy weather along a lee-shore, it was customary for one of the men to take his place on the gunwale, and there continue waving his hand in the direction opposite to the sweep of the sea, in the belief that this species of appeal to it would induce it to lessen its force.’

What name would you give your boat, and would there be any rules / superstitions for your crew to follow, like no whistling? 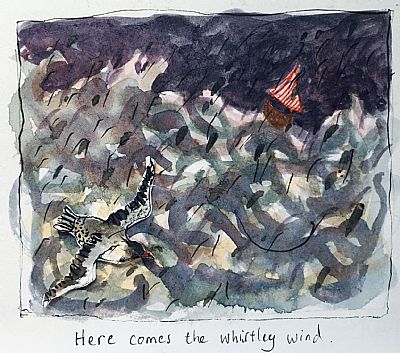 Thanks to everyone who told us their hair-raising stories. Here are some of them bellow . . .

A fishing crew from Culbokie told us that they were on a passage in the North sea, bound for Bremerhaven in Germany. The wind force was 11, which is one less than a hurricane. It was night time and the waves were huge. They were hit on the bow of the boat and there was an almighty bang. The next day they discovered that the mental stairway on the boat was completely buckled and their anchor light, which was probably about 20 metres above sea level, ws nowhere to be seen!

“I have seen the sea at its absolute worst and seen it for its tranquility and beauty, always respecting it and never taking it for granted. The sea is where you worked but you never underestimate its power...incredible” - A Culbokie fisherman

A local sailor went for three days with no sleep, when he was caught in a storm in the Bermuda Triangle. They were travelling at 7 knots with no sail up, their boat going up and over 20ft waves - that’s taller than the lampposts in Cromarty.

Two Cromarty residents were sailing on the Spanish coast when their mast got struck by lightning, and so did one of the lights they were using to navigate safely into the harbour. Luckily they made it back to dry land.

Another local told us a story about sailing in northern Greece when he saw what looked like three suns in the sky, because of the way the light was reflecting off the mist around them.

One local resident learnt to swim at the age of four by being thrown in the sea! She is now an amazing and strong swimmer. About going out on the skiff she says:

“We row in rain, hail, snow and as happy as we go” and “the wilder the sea the better, for me the power amazes me.”

‘ Scotland possesses a great many harbours of which Cromarty at the mouth of the Northern river is held to be the safest.’

The Ross-Shire Journal in Nov 1881 writes of vessels being ‘compelled to run to Cromarty for shelter from the gale . . . as the storm continued with considerable severity in the Moray Firth and the German Ocean.’

The Cromarty Fishermen used to walk down to the Weatherglass house as there used to be a Barometer on the wall there. A Barometer is an instrument, a bit like a compass, which measures the atmospheric pressure and gives a weather forecast. The fishermen would read the barometer before heading out on their boats to know whether it was safe to go fishing or not.

Can you imagine what it's like to be a seabird or sea mammal in a storm? What would it be like to be a seagull flying against the wind, trying to catch a fish? Maybe you would find a passing ship to take refuge on?